Lots of people seem to think the principles of value investing, as articulated by Benjamin Graham and Warren Buffett, are out-dated and, indeed, dead. But some top Australian investors disagree.

IS VALUE INVESTING OUT OF TOUCH?

Finance journalist Rudi Filapek-Vandyck, of fnarena.com, suggests people clinging to value investing are “grown up, intelligent and experienced men ignoring or refusing to accept that the world, yes indeed, has changed profoundly, and will continue changing for a lot longer.”

And it’s easy to understand why he feels that way. When the value of tech darlings like Afterpay and Xero are up 400-700% over the last two years, despite no real profits to date, who needs to bother to look for traditional measures of value?

Rudi asserts that “many a typical Value investor has completely ignored the seismic changes taking place across the globe post GFC…. Growth has now performed (decisively) better than Value … in Australia… since early 2013.”

Tony Kynaston, a professional value investor based in Sydney who has been a student of value investing for several decades, is skeptical that the world has changed as much as Rudi would like to think. “I’ve seen this movie before and I know how it ends,” he says. “It feels like 1999 all over again.”

Kynaston, a former Coles and Shell executive whose share portfolio has delivered an average return of 19.5% over the last twenty years, considers himself more risk averse than many other investors. He is also my co-host on the weekly QAV podcast where he teaches his approach to value investing.

While he recognises that Growth stocks clearly have huge potential, Tony says that, as an investor, “the hard thing is to work out how much to pay for them.”

“If you’re only buying a stock because you hope the price is going to go up, then that’s speculating, not investing,” he says. “You might as well put the money on the track.”

“Besides,” says Tony, “everybody is a value investor. We are all trying to pick stocks that will be worth more tomorrow. The difference is in how we determine which stocks we believe have long-term value.” 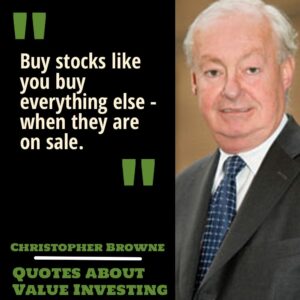 Another Australian investor, Roger Montgomery of Montgomery Investment Management, agrees that value investing is still the best approach for consistent long term results. He believes the ASX is experiencing bubble-type behaviour. As a result, he has moved 24% of one of his domestic funds, and 30% of another, to cash, to hedge against a downturn and to have dry powder ready to deploy when opportunities arise.

“Experience tells me that people are focused very much on the fear of missing out. And when that fear of missing out usurps the fear of loss, which it has done for the last 24 months, my experience tells me that we’re towards the end of the rally and not at the start of it,” he said on our podcast recently. “Prices have disengaged so much from value.”

Roger also points to “record prices being achieved for collectables” with “ridiculous sums being paid for some things” as evidence that “we’re towards the end, and really all you need is a black swan, something nobody has been talking about, and that’s enough to pop the bubble.”

“They said that in 1999, too”, replied Tony. “The market tends to rhyme, even though it doesn’t repeat.”

Montgomery says he’s comfortable with his value investing approach, even though there’s a lot of pressure to “swing” from the people sitting in bleachers, a reference to Warren Buffett’s favourite baseball analogy. He is confident that looking for value in quality businesses is “a less stressful and lower risk” way of investing.

Kynaston agrees. “What matters to serious investors isn’t your returns over a few years,” he claims. “It’s your average return over decades. A consistent, scientific approach to value investing is the most proven methodology for beating the market long term.”

“It’s always a guessing game in the share market, which is why I like putting trust in the numbers and having a checklist.”

As one of Tony’s favourite Warren Buffett quotes goes: “Only when the tide goes out do you discover who’s been swimming naked.”

Each week we send out a few updates from Tony - his views on investing, books to read, videos to watch, and what's happening in the economy. Sign up now to get your free copy in your inbox each Friday.